The bylaws of the Swiss Laos Hospital Project

THIS ENGLISH TRANSLATION IS PROVIDED FOR YOUR CONVENIENCE. LEGALLY BINDING IS THE GERMAN ORIGINAL ALONE. 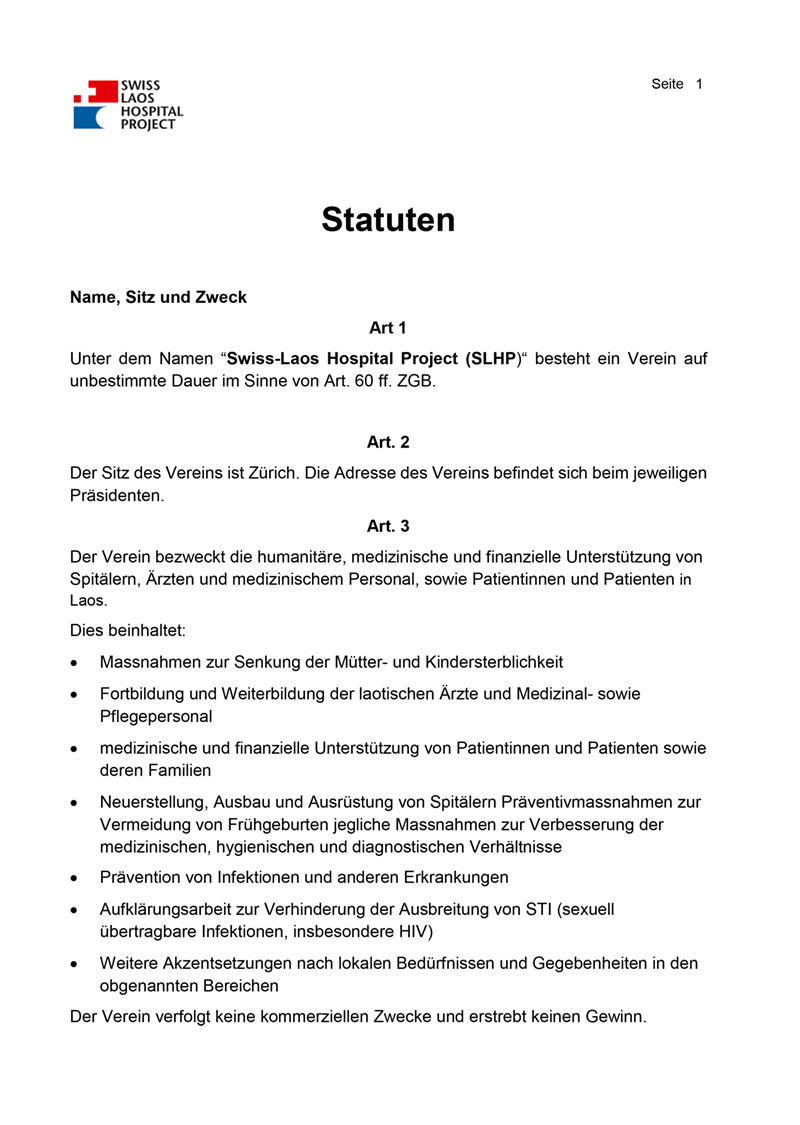 Under the name «Swiss-Laos Hospital Project (SLHP)», an association («Verein») exists for an indefinite period of time according to art. 60 ff. of the Swiss civil code («ZGB»).

The purpose of the association is the humanitarian, medical and financial support of hospitals, doctors and medical staff as well as patients in Laos.

The association does not pursue commercial purposes and does not aim to make a profit.

Any natural and legal person who supports the objectives of the association can become a member.

The association consists of active members, honorary members and passive members, the latter without voting and election rights.

The membership fees are determined in the general assembly. Honorary members are exempt from the fees.

The bodies of the association are:

The two latter bodies are each elected for two years at the ordinary general assembly of the association. A re-election is permitted.

The regular general assembly takes place every year after completion of the financial year, at the latest in June.

Motions from members for the attention of the ordinary general assembly must be submitted in writing, with a brief explanation, to the board by 31 December.

The proposals must be included on the agenda.

Invitations must be sent to all members at least 20 days before the ordinary or extraordinary general assembly, stating the items on the agenda.

The president is usually the chairman of the general meeting. Minutes are to be taken of the association meeting.

The ordinary or extraordinary general assembly has the following competences:

Each member of the association has one vote at the association meeting. The General Assembly passes its resolutions and carries out its elections by a simple majority of the votes cast, unless the statutes stipulate otherwise.

If, in elections in a first ballot, candidates do not achieve a simple majority of the votes cast, the relative majority shall decide in a second ballot.

All votes and elections must be held openly. 1/5 of the members present may demand a secret ballot.

In case of a tie, the chairman has the casting vote.

The board consists of 7 to 9 active members. The president and all other board members are elected by the general meeting for a period of two years.

The board constitutes itself.

The board manages and administers the association and represents it externally. It is entitled to all powers which are not assigned to another organ of the association by the statutes or by law.

Commissions or delegations may be appointed for special tasks.

The president, together with another member of the executive committee, provides the legally binding collective signature for the association.

Board meetings are held at the request of the president or two other board members.

Board meetings must be recorded in minutes.

The presence of a majority of the board is required for a quorum. Resolutions are passed by a simple majority. The chairman has a vote and has the casting vote in case of a tie.

Decisions may also be taken by circular letter.

The president runs board meetings as well as ordinary and extraordinary general meetings. He ensures that the decisions are implemented.

The actuary, in cooperation with the treasurer, keeps a membership register and usually handles correspondence. He keeps the minutes of the board meetings and the general meetings.

The treasurer takes care of all accounting. He/she prepares the annual accounts and the budget, which are discussed and approved by the board and then submitted to the ordinary general assembly.

Funds of the Association

The funds of the association consist of:

a) The annual membership fees
b) Endowments, bequests and monetary donations
c) Beneficial contributions of all kinds

The achievement of a profit is not intended. Any net income is to be carried over to the following year of the association. A distribution of the net income among the members is excluded.

The financial year begins on 1 January and ends on 31 December of the current year.

Revision of the Bylaws

A two-thirds majority of the votes cast is required for adoption.

The dissolution or merger of the association can only be decided by a two-thirds majority of all members.