The association «Swiss Laos Hospital Project» aims to provide humanitarian, medical and financial support to hospitals, doctors and medical staff as well as patients in Laos.

The following activities were carried out in the year under review.

Members
17 new members were admitted, so that the association had 111 members on 31st December 2018. In addition, 14 students were admitted to the newly created category «student members».

Work performed by volunteers
60 persons from Switzerland were deployed in Laos and worked there for a total of 1,141 days (of which 28 persons from the KSW with a total of 558 days). In Switzerland, at least 1,476 documented hours were spent free of charge on the SLHP.

Gynaecology and obstetrics
Urs Lauper was present in Laos for a total of 88 days and coordinated various projects on site. Besides him, another gynaecologist and 3 midwives were on duty. They gave further training to Laotian doctors and midwives (focus: safe birth, hygiene, ultrasound examinations). In 2018, 6,077 childbirths (previous year: 5,695) took place at the Mother and Newborn Hospital in Vientiane, of which 2,145 were Caesarean sections (previous year: 1,810). 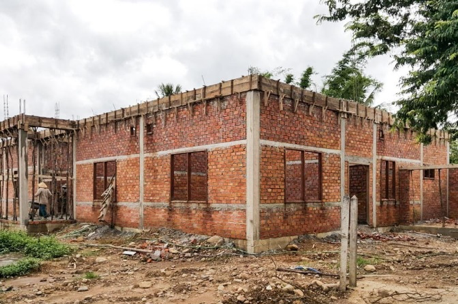 Construction of the new paediatric ward in Muang Kham

Delivery kits
This project, financed by the Swiss Lottery Fund, enables safe and clean cutting of the cord, especially for home births. In 2018, 30,000 sterile delivery kits were produced in Laos and distributed to hospitals and health centers throughout the country.

Neonatology
In March and November, nurses and doctors worked in the neonatology departments of Mother and Newborn Hospital (capital Vientiane), Maria Theresia Hospital (province Vientiane) and the provincial hospitals in Phonsavan, Xam Neua, Luang Namtha and Pakse. The main focus was on bedside teaching of the Laotian colleagues, the development and introduction of guidelines and the instruction of the medical equipment supplied (incubators, bilimeters, etc.). 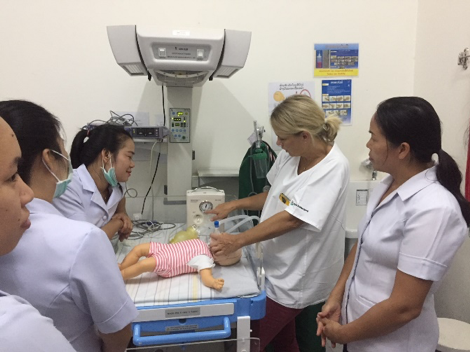 Follow-up examination of former premature babies
In this project we investigate the health status, growth, development and vaccination status of former premature infants at the age of two years. In this way we want to test the effectiveness of our work.

Family doctors
The general practitioners were on duty three times with teams visiting the hospitals of Muang Kham and Nong Het. From there they visited 5 health centers as well. They were primarily working as trainers in the context of daily staff meetings, ward rounds and specially organized workshops.

Hospital partnership KSW-Phonsavan
Since 2010, the Cantonal Hospital Winterthur has maintained an independent partnership with the Provincial Hospital in Phonsavan to exchange knowledge, skills and experience in various hospital activities (see separate report).

Construction/Infrastructure
Thanks to generous donations from public and private donors, several construction projects were planned and realized in a very short time:

Equipment and material
In November, another large container with medical material and equipment that is no longer used in Switzerland but still fully functional arrived in Laos. It was unloaded by our helpers on site and the contents were distributed to the different hospitals.
Our emergency teams maintained laboratory equipment in the various hospitals. Some of them brought reagents from Switzerland, as far as they were not available in Laos. 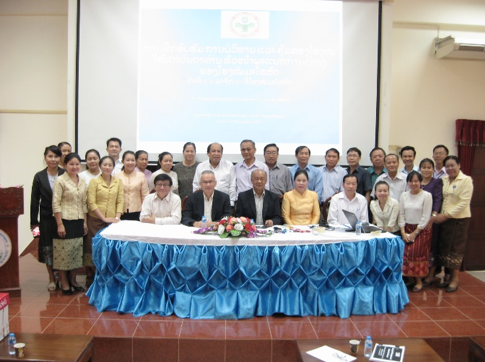 Workshops for hospital management
Alphons Schnyder, together with the Lao Health Department, organized several hospital management workshops in May, July and October, which were well attended and evaluated. This gave us direct access to the Lao Health Minister, who visited the University Hospital Zurich and the Cantonal Hospital Winterthur in May thanks to our initiative.

Scholarships for further education and training
The group of family doctors awarded scholarships to four Laotian doctors and one nurse for further training of 3 and 6 months in Vientiane capital. In addition, contributions were made to English and IT courses.
Thanks to our support, the neonatology department of the Mother and Newborn Hospital was able to send 6 Laotian doctors and 12 nurses to Kon Kaen University in Thailand for a three-month training course.

Exchange program for students
In 2018, a total of 15 Swiss medical students in their fifth year completed a one-month internship at the Mother and Newborn Hospital (previous year: 14).

Public relations
According to the changing information behavior of our target groups and to save costs, we are increasingly shifting our communication to digital channels. In 2018, for example, we sent only a single printed newsletter by post to our 2,770 supporters and produced the traditional photo calendar 2019 in a print run of 250 copies.
In return, we have massively expanded our presence in the social media (Facebook, Instagram, LinkedIn). In addition, we were able to launch our completely renewed website in January, which was created by Martin Sauter as a volunteer (i.e. without any donation money). In autumn, an improved online donation system was also implemented. An email newsletter is sent four times a year to inform about our activities and benefit events.
The film «Typically Laos…», made by Markus Abegg about the work of the family doctor group in Xieng Khouang province, was shown publicly several times and brought the project a lot of recognition, which was also reflected in considerable donations.
At a bazaar in the parish hall of the reformed church Zurich-Oberstrass in November we were able to sell valuable silk scarves and other handicrafts from Laos at our own booth. We also received two thirds of the total revenue of 21,000 Swiss francs.
Several members of the board gave lectures about our project.

ZEWO
In a process lasting several months, we were able to prove that the SLHP meets all 21 standards for the ZEWO seal of approval. This required the conversion of the association’s annual accounts to the Swiss GAP FER 21 accounting standard (accounting for non-profit organisations). We also established an internal control system. Our bank account and our investments in Laos, which do not comply with the Swiss standard of double signature, proved to be the biggest obstacle.

New Memorandum of Understanding (MOU)
Thanks to the negotiating skills of Marion Mönkhoff, we were able to work out a new framework contract for our work in Laos for the years 2019 to 2021 together with Dr. Path Keungsaneth, the new director of the Mother and Newborn Hospital in Vientiane. This must now be approved by the Health Ministry and the Ministry of Foreign Affairs of the Lao People’s Democratic Republic. 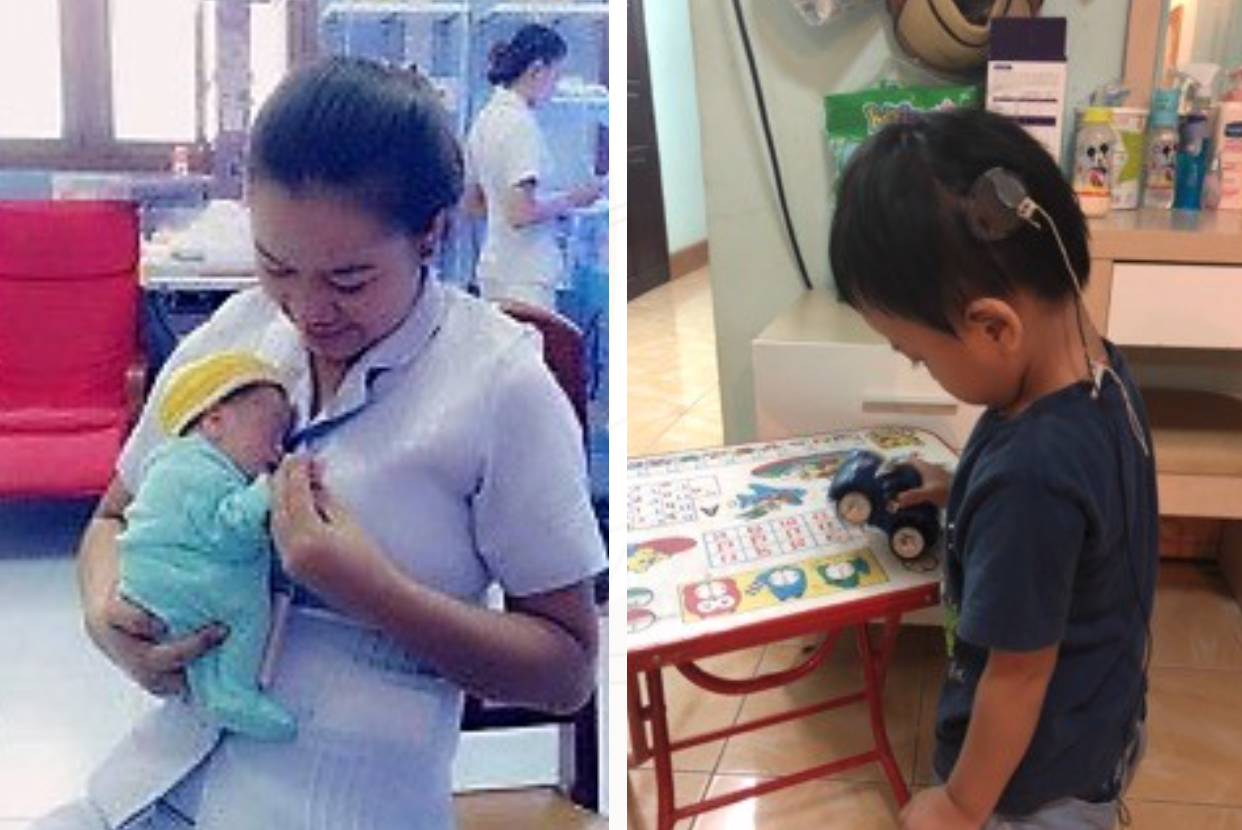 Daniel was born 8 weeks too early with a weight of only 1’200 g in Vientiane. His mother left him in hospital, where he was cared for by nurses for several weeks in the premature infant ward. During this time he received antibiotics, which unfortunately were too highly dosed and severely damaged his hearing.

Daniel is now 3½ years old, and he is doing well. He was adopted by the head of the ward, and thanks to a cochlear implant financed by the SLHP he can hear again. He regularly attends speech therapy.

Thanks
Since its foundation by Urs Lauper almost 20 years ago, our project has developed into a respectable venture. It is supported by the many volunteers, who give their expertise and time free of charge, and by the numerous sponsors, who support us with smaller and larger financial contributions.
I can assure all of you that we receive the highest recognition from the government and the people of Laos because we use our limited resources in a targeted manner and make a difference.
A big thank you to all who support us. 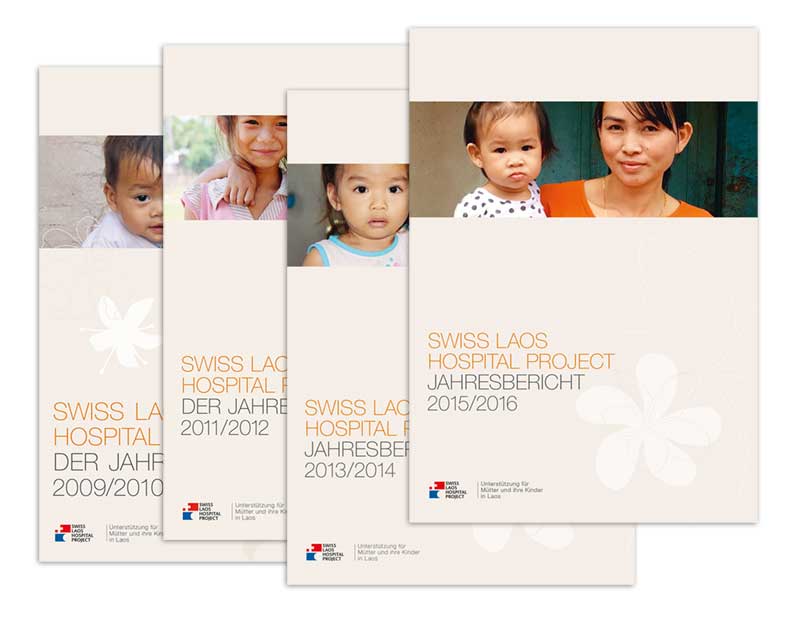